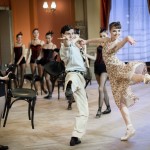 If you read my last post about Julian’s big television debut, you might be wondering how to actually watch his performance on live German television from wherever you are this New Year’s Eve. And I promised to provide you with the link once I had it. Now I finally have two links that should work; […]